The day my daughter nearly drowned...

It all started last Sunday, when I suggested going swimming with my best friend and her daughter. As our daughters have both turned four, I grabbed the opportunity to take both my kids on my own (without the hubby). The admission policy changes when your child reaches four, and one adult take two children in so I arranged for my friend to take the two girls in, and I took my boy.

It started off well, and all of them were loving the water. My daughter is such a water baby and is so confident in the water even though she can't swim.  She loves doing somersaults in the water, and diving to the bottom to pick up her swim stick. With her being so fearless it is easy to forget that she can't swim. My best friends daughter wasn't wearning armbands so my daughter wanted to follow suit. Initially I wasn't too happy with this as I knew it would be a tougher challenge watching 2 kids rather than one, but I gave in.

They were both playing in the water and having fun. I was keeping an eye on both her and my one year old son which is where the problem began. My daughter came over and said she wanted a large float. I pointed across the pool and told her to go and get one as I was catching up with my friend. I carried on chatting to my friend and keeping an eye on both children, but they were over different sides of the pool so I was failing miserably. My friend caught sight of Iola in by the floats and asked me if she was alright. I looked over and she was blatantly in trouble. She was thrashing around trying to keep her head above water, and obviously had ventured too deep. My heart was in my mouth. I dashed over and as I got closer, she stopped thrashing and sank to the bottom. The look on her face was one of desperation.  I was terrified. I raced as fast as I could (which isn't easy when you are wading through water) and pulled her out of the water, Luckily she was still conscious, and apart from coughing/crying a lot, she was fine. I felt absolutely terrible and annoyed with myself for letting her go across the pool unaided. There was a lifeguard right by her but he didn't notice she was in trouble until I leapt to pull her out. He looked a bit sheepish and asked if she was OK but ultimately she was my responsibility so I didn't feel too aggrieved. 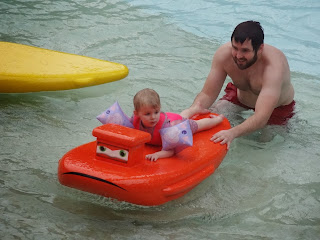 Tonight we went swimming again, but I made sure that she wasn't more than a couple of meters away from me.  I also took the husband with me so that there was 121 supervision. The good news is that she was fine with the water, and was back to her daring self. As we were getting changed, she was amazed watching the swim club practicing, so I really hope she keeps up her interest in swimming. I still can't help feeling awful, but I guess this blog is not called the Diary of a Bad Mutha for nothing.
Posted by Unknown at 13:45