I nominated my grandfather Gerald in the MEGA Blok's MEGA Bloke of the year contest earlier in the year and last week I heard the exciting news that he had been shortlisted in the top ten of this national competition.

I nominated him as, not only has he played an important part within his community over the last 20 years, but he has also been a wonderful great grandfather to my beautiful children. After retiring early from his job through ill health, Gerald decided he still wanted to make a difference and became a volunteer for the Welsh Ambulance Service. He spent 20 years with the service, transporting people to hospital for treatment, which often meant leaving the house at 5am. Gerald has become one of the longest serving volunteers in the history of the Welsh Ambulance Service and at the grand old age of 80 he has now finally retired. He does however still continue to volunteer in a different way, and spends time visiting long term prisoners.

He really is a MEGA Bloke and I would be really grateful if you could vote for him and give him the recognition that he deserves! 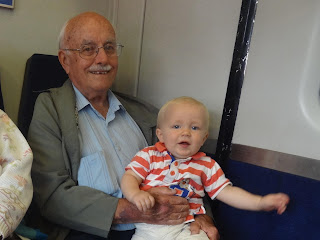