I need some space!

Let me start by saying I adore my son Bryn. He is 8 months old now and I love seeing him grow and develop. Having said this, I need to be honest and say that he wasn't planned.

As I have already said in some of my earlier posts, money is tight and we only have a small two bedroom cottage which was already pretty cramped with just one child. When I found out that we were expecting I admit I had a little cry (I guess I should have paid more attention in my sex education classes!). The enormity of what was about to happen was crushing and I wasn't sure how we were going to make it work.

As my pregnancy went on, I slowly started to accept what was happening and start to plan for the future. We initially explored our options, and decided that we would try and cope with the accommodation we have. We couldn't move as we were in negative equity, and had no money for a deposit. We also didn't have enough money for an extension although we did have enough (thanks to my lovely father!) to pay for a small do it yourself conservatory which we were able to have built on the front of the house to give us a bit more room. 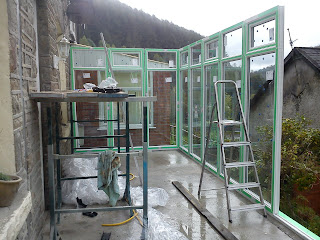 We also found out about this great product called a Shanticot (http://www.shanticot.co.uk/) which would allow the baby and our daughter to share a room. It is like a bunk bed but has a cot on the bottom and a toddler bed on the top.

The day finally came for Bryn to make his entrance, and we hoped that we could cope with the space we had. Unfortunately we reached crises point after me having spent six months sleeping on the sofa, with Bryn in his Moses basket. He woke every hour during the night so it just wasn't feasible for him to share a room with either his sister or his father (who was back in work full time). We decided we desperately needed another bedroom so made the decision to get a loan to enable us to buy another house and we would have to rent out our house until it wasn't in negative equity anymore.

This was incredibly risky but at the time we felt backed into a corner and this was our only option. As time went on, the situation with Bryn improved as I returned to work Full Time, so started to bottle feed. He now only started to wake once at night (I can only assume that something was not quite right with the breastfeeding previously) and I was able to sleep back in the bedroom, with Bryn in a small cot.

My husband and I were getting more and more nervous about moving house and the risk we were taking so we decided at the last minute to pull out. After speaking to the father in law he said that he could build us an extension which would give us the extra bedroom that we needed, for a price that we could just about afford. This seemed the perfect solution but unfortunately things have not since gone to plan.

We decided to make an offer for a bit of wasteland that the next door neighbour owns, but unfortunately she wasn't happy with price we offered and refused to tell us what she wanted for it. This wasn't the end of the world though as it just meant our extension plans had to be scaled back a bit but we could still just about squeeze an extra bedroom onto the back of our property. We were anxious to remain on good terms with the next door neighbour but she seemed to be uncomfortable talking to us since we made our offer.

Today my husband spoke to her to fill her in about what we had planned, out of common courtesy. Unfortunately she wasn't happy with what we had planned, and has said she is going to seek legal advice. She is quite within her rights to do this, but I feel very disappointed tonight, as I know that this could seriously delay our plans. It also means our relationship with her will probably be strained which is far from ideal when we have just made the decision to stay where we are.

I really despair sometimes! All we want is enough space for our family but it looks as if it is going to be an uphill battle to achieve, like most things in my life at the moment.

Email ThisBlogThis!Share to TwitterShare to FacebookShare to Pinterest
Labels: housing